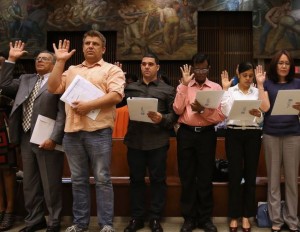 If you have a discrimination case pending, you may be able to access cash in advance of your settlement. Click this picture to fill out our 30-Second Application.

California recently passed new laws to protect illegal immigrants throughout the state.  In the past, the Golden State had not always been so welcoming, but the state has been described as something like a sanctuary for the three million illegal immigrants who live within California’s walls.  Still, there are cases where unfair practices and prejudices are evident.  Victor Guerrero, now a legal American citizen originally born in Mexico, filed a discrimination lawsuit against the California Department of Corrections and Rehabilitation after applying for a job as a prison guard at Pelican Bay State Prison twice, being denied both times.  He also filed a discrimination lawsuit against the State Personnel Board, which supported the department’s decision to deny him the job.   According to the Los Angeles Times, Guerrero accused the department of violating fair employment laws and unfairly hurting Latino applicants.  His attorney said her organization decided to take up Guerrero’s case because it frequently hears from previously undocumented immigrants who have achieved lawful status but who are afraid to the tell their employers for fear of retribution.

All residents of Northern California are eligible for litigation funding for personal injury claims, discrimination suits, and negligence cases, to name a few.   From Crescent City where Pelican Bay State Prison is located, to Sacramento, Interstate Lawsuit Funding works across Northern California to ensure immediate pre-settlement funding for plaintiffs like Victor Guerrero.  While Guerrero’s attorney works to win his case against the state, litigation funding in the form of a lawsuit loan cash advance could help him pay expenses, rent, mortgage, and other household bills.  Guerrero who lives with his wife and three kids will need some form of income to maintain everyday living while he waits for his settlement.  He would never have to worry about the burden of repaying the loan if his lawyer did not win the case. With Interstate Lawsuit Funding, all loans are considered nonrecourse, which means if Guerrero’s lawyer did not win his case, he would not be obligated to pay anything back to Interstate Lawsuit Funding.  There is no obligation to the client, no credit check to get started, and no repercussion for applying. The decision to provide funding is based solely upon the merit of the case.

The highly trained loan professionals at Interstate Lawsuit Funding have years of experience in the state of California, getting residents the lawsuit loan cash advances they need while in the beginning, middle or ending stages of litigation. The decision-making is precise and the funding process is fast, made on the best terms possible for residents of Crescent City, San Francisco, Sacramento and all of Northern California.

If you are a California resident with a pending settlement, immediate cash in the amount of $1,000, $2,000, $3,000, even $5,000 is available. With Interstate Lawsuit Funding plaintiffs receive immediate decision pre-settlement funding, a quick decision, fast funding and notable expertise.  Start by filling out our 30-second online application.